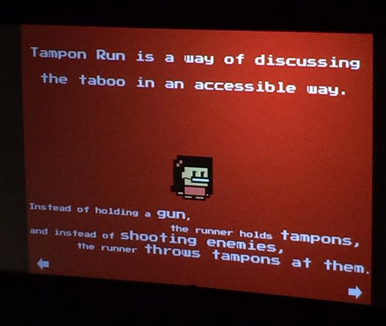 Summit in Providence, RI.  The BIF Summit always has a full (and well-gender-balanced) slate of fabulous speakers.  We were particularly inspired by young Sophie Houser, the co-creator of the video game Tampon Run, a game that uses humor and satire to combat the societal taboos around menstruation.
One thing Sophie said rang particularly true.  She said she has received numerous messages from other young women who said that Tampon Run inspired them to learn to code, because “no boy would have created Tampon Run.”
When we talk about diversity of thought, and WHY we need more women on speaking panels, and in management roles, and on corporate boards, and, well, everywhere in business, this is a terrific example.